A Once in a Lifetime Experience 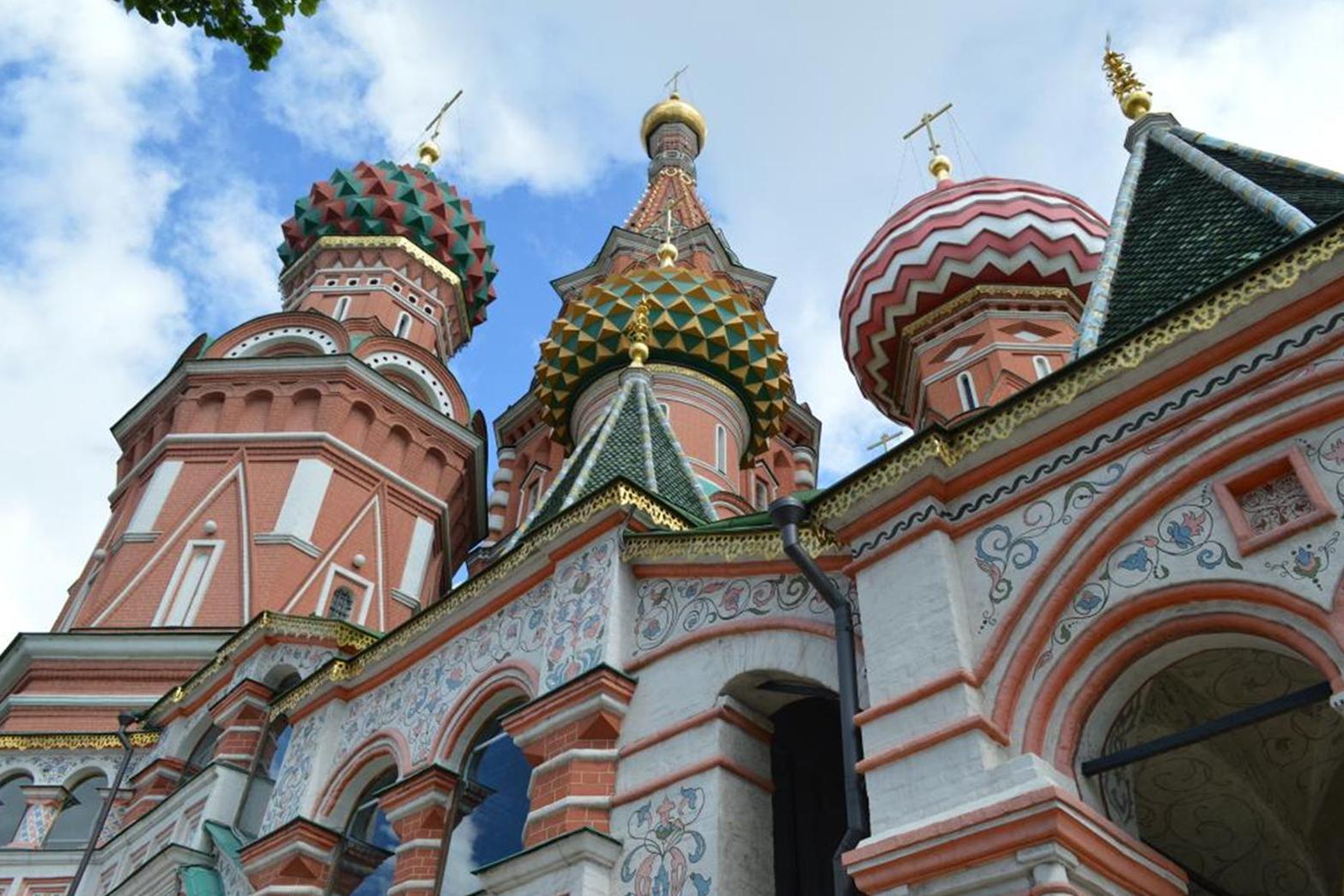 Thirty five Year 10 and 12 students who have recently returned from a six day trip to Russia, can definitely claim to have taken part in a truly memorable visit. From start to end it was one fascinating, intriguing experience after another, providing memories that should truly linger. 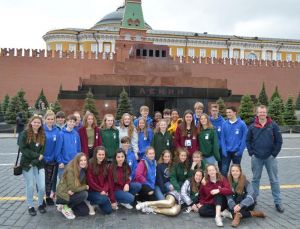 On the Saturday of half-term we departed at an unfeasibly early hour for Heathrow, for our flight, via Munich to Moscow. The first pleasant experience was the legroom on our first flight! On arrival at Mosco w, we went through extremely rigorous immigration procedures, and then met our first guide Natalia, who proceeded to call us her ‘beloved Bishop Luffa’ for the next three days. On Day 1 it was enough just to arrive at our hotel, and to relax after a very long day. Our accommodation in Moscow was the Hotel Cosmos, designed during the Communist era (and it showed). The largest hotel in Moscow was a real Cold War relic. Its semi-circular design, 25 storeys and twinkling night time façade just served to emphasise what a unique experience we were having!

On Day 2, it was a (fairly) early start that plunged us straight into the heart of Moscow, Red Square. After a fairly short queue we were able to enter Lenin’s Mausoleum. It was an eerie experience to lay our eyes on a man we have studied in such depth, and who died 93 years ago! Most students felt that he looked quite waxy, and very ordinary. On leaving the mausoleum, many students were (unsurprisingly) surprised to see many, many carnations on Stalin’s tomb. It was then from one extreme to the other, as we then entered Gum, a giant department store and temple to capitalism. The endless malls eventually led us to one of the most iconic sights of all, St Basil’s Cathedral. Its amazing onion domes seemed quintessentially Russian. Then it was off to Novodevichy Cemetery, and amongst others, the grave of Khruschev. A lunch break on Old Arbat Street (with a meeting point outside Pushkin’s House) also gave many students their first opportunity to buy a range of souvenirs of debatable quality! In the afternoon, a visit to the Gulag Museum was a sobering experience, highlighting the limits to freedom that went alongside the showpiece buildings and achievements of Communism. After dinner at the hotel, we crossed to the road to another suitably bizarre site – VDNKH, a theme park from the time of Stalin devoted to the achievements of the USSR. To sit in this park, and gaze at the Cosmos was truly a chance to be ‘back in the USSR’!!! 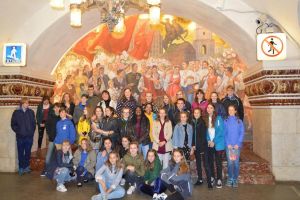 Day 3 was even more fascinating and even more of an experience. As it was Monday we were welcomed into the horrendous Moscow traffic – 10 lanes of gridlock, and one empty lane reserved for VIPs. It was straight to the Kremlin, to see the amazing treasures inside. From carriages, to cannons, to the World’s largest bell, to Faberge Eggs, it was quite amazing, and to be in the Kremlin was an experience in itself. From the Kremlin it was time for lunch in a nearby food court, with a chance to visit a Russian supermarket, and then there was another sobering site to see – the tomb of the unknown soldier. So far we had been blessed with great weather, but by now the heat was sapping, and the building humidity suggested a storm on the way. We boarded the coach for Sparrow Hills, and an amazing view of Moscow, with the backdrop of a Stalinist skyscraper. However, things took a shocking turn when the rain in the distance turned into a sandstorm and incredibly strong winds. We just made it to the coach in time, but later found out that elsewhere in Moscow, people had died when the sudden storm caught them unawares. Some of us were still picking sand out of our hoodies on the way home to Chichester. We proceeded, windswept to the Moscow Metro, and marvelled at palatial stations, which also had a Socialist message. From there it was dinner in a local restaurant with a kitsch Communist theme. Many of the pupils had to (reluctantly!) agree that they quite liked Borscht and Stroganoff!!! An evening of competitive bowling followed, and then it was off to what was, for many, a highlight of the trip, the Grand Express Night Train to St Petersburg.

The Night Train was a glimpse into a more civilised era of travel. Uniformed attendants welcomed us to each carriage, where pupils settled into surprisingly comfortable 4-berth compartments which included a TV, charging sockets, free wifi, complimentary slippers and toothbrushes. In the morning we awoke to see the Russian countryside passing us by, and to receive tea or coffee provided by our steward. A most delightful way to arrive in St Petersburg! 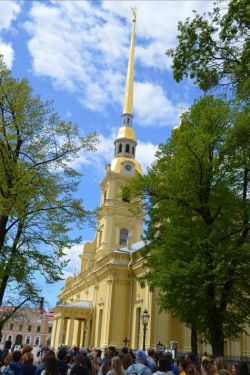 On Day 4 it was time to get acquainted with St Petersburg. Moscow was built on a huge scale, and the Communist influence seemed immensely strong. St Petersburg was undoubtedly Russian, but also more ‘European’, exactly as Peter the Great intended when he decided to found the city. Good weather, and Maria, our local guide, greeted us, and we enjoyed a generous breakfast at a local café. From there, the morning was spent on a whistle-stop tour of the main sites – the Aurora Battleship, Nevsky Prospeckt, the Admiralty, and more. We also visited Peter and Paul Fortress, a prison for political prisoners in the time of the Tsars. We saw the cell where Trotsky was imprisoned in 1905, and witnessed the grim nature of the punishment cell. We also, however, saw the most amazing Cathedral, the burial site of the Tsars – if any site summed up the contrasts of Russia, this fortress was it. Then it was lunch on Nevsky Prospekt, one of Russia’s great streets, and off to the hotel, which after the Cosmos, seemed absolutely palatial (if again, built on an immense scale!). 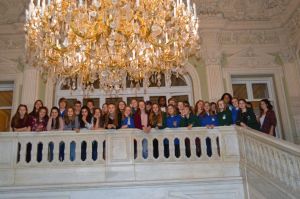 Day 5 brought even more superlatives. First it was a stop at St Nicholas’ Cathedral to experience part of an Orthodox service. This was a deeply moving experience, and again quintessentially Russian. We went straight to the Yusupov Palace. This private palace (prior to 1917) was one of many owned by the Yusupov family, and was truly sumptuous. The private theatre was a treasure in miniature. We also saw the cellar where the notorious Rasputin was murdered. The wax effigy just added to the surreal nature of the experience. Lunch on Nevsky Prospekt followed, and for the Year 12 Art students, the chance to visit the Russian Museum and see examples of Russian art. Following this it was off to the Hermitage (along with all the tourists in St Petersburg, or so it seemed!), to see one of the World’s greatest collection of art treasures. From Egyptian Mummies, to Leonardo Da Vinci paintings, there were treasures galore, and the building itself was a fantastic way to see the opulence of the Tsars. Glimpsing out of windows we could see the Palace Square, where events such as the 1905 Bloody Sunday Massacre occurred. In 1917 the Bolsheviks stormed the Winter Palace. Our own version, on the same stairs, wasn’t particularly dramatic (but then again neither was the original!). From there we went for an unbelievably fantastic meal at Symposium. It was an amazing end to an amazing day, and it was barely dark by 10pm, as we were so far north.

Day 6 saw us check out and head off to Peterhof, another unbelievably grand palace, this time just outside the city. It was room after room of riches, and set in the most amazing gardens. Another glorious site. From there it was off to the airport, and more strict security. A delay meant a dash at Munich airport, but we made our connecting flight and then had a brilliantly speedy journey through Heathrow. Finally, it was a very tired group of students who got back to Chichester at 10.30 pm.

This was a truly fantastic trip. In many ways we didn’t know what to expect, but it was what we expected. There was really a feeling of being somewhere different, but with so much that was familiar (McDonalds anyone?). It’s a place where ‘big history’ happened, and we saw it. The pupils were a credit to the School, and my thanks go to them. My thanks must also go to Mr Putnam, Miss Burton, and Mrs Aspinall-Nessling, who provided excellent support throughout, and helped make the trip the success it was.