‘Life is only travelled once, today’s moments become tomorrow’s memories. Enjoy every moment, good or bad because the gift of life is life itself’ - Mel De Lacy

King House recently welcomed friends of Mel De Lacy and Kat Tucker from the Charity Sarcoma UK to a special celebration assembly to mark the fantastic fundraising efforts of King house during their Team Triathlon Event.

Pupils and friends of Mel de Lacy joined together in remembering the inspirational and much loved and missed Mel de Lacy who helped us to begin our work with Sarcoma UK and who will inspire us in all our future efforts for this cause. In addition to praising the fundraising efforts friends of Mel were touched to hear that King House students had also dedicated their house drama play 'A Monster Calls' to Mel. The pupils finished by reflecting on Mel's own truly motivational words, knowing that they are part of making her wish for others a reality.  Mel De Lacy was a true inspiration, a believer, a leader and a fighter.

Mel was terminally diagnosed with a rare form of Sarcoma cancer. Sarcoma is a cancer of the bone and soft tissue which only one in three people are aware of. But it’s the actions that Mel took which are shaping the landscape for charities like Sarcoma UK today. Mel set herself a goal, a goal which would not only require her hard work, but a goal which would demonstrate that you really can turn the most negatives times into extreme positives. She set herself a challenge to fundraise and boost awareness of Sarcoma and today the Mel De Lacy ‘let me be me’ campaign fundraising figure stands at over £50,000.

The King Team triathlon event has supported this awareness and vital fundraiser for Sarcoma UK for the past two consecutive years. Last year we reached out to Mel in the local community and supported her fundraising efforts on behalf of her campaign as King House.

Our King Team Triathlon event had students signing up to swim, cycle, run and walk to get active as a team. Across our six week time period we recorded our active exercise hours and collected sponsorships. On Friday 25 June we held our King Team Triathlon celebration day as an awareness boosting day for Sarcoma UK. A huge congratulations to all students who participated. As a house, King raised an outstanding £1767.63 for Sarcoma UK. King House plan to make this an annual event. 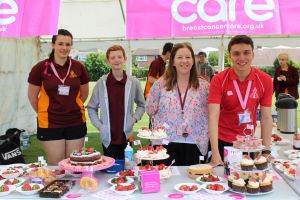 “I’ve always told my children that you should never stop believing; that anything is possible and that positivity is the key.  I believe that in time, there will be a cure for this and other rare cancers and that we should never give up hope of finding one. Never say never...." - Mel De Lacy