A group of Sixth Form Law students recently took part in the Regional Heats of the Bar Mock Trials. In the Bar Mock Trial Competition, state school students take on the roles of barristers and witnesses and present their case against teams from other schools. First; they have to become familiar with the case; then, they have to battle it out in real courtrooms, in front of real judges.

Their performances are judged by Circuit Judges, Recorders (Sheriffs in Scotland) and senior barristers or advocates. Winning teams from regional heats then fight it out in a prestigious national final.  Ben Morton (13Otter) gives his report on the day …

Bishop Luffa retained the status of regional champions by winning the Law Bar Mock Trial for the second year running, with the use of some fantastic debating, arguing, and knowledge of the law. The event once again took place at Guildford Crown Court and it was an early start and late finish for all of us involved, leaving before it was light and returning after it was dark! However, it was an enjoyable and rewarding day, with the team extremely well led to victory by Mr Thomas and Ms Barnett. 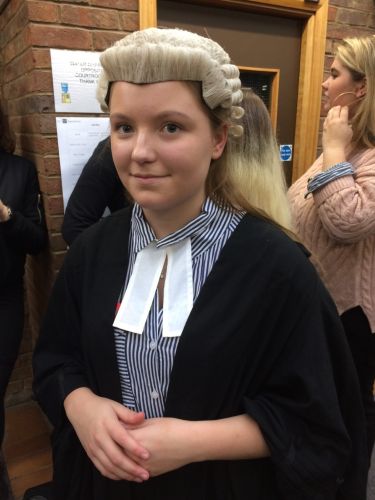 The day involved three rounds with us taking turns prosecuting and defending the case of R v Marshall and the case of R v Grey, going up each time against another school who would be doing the opposite themselves. Two barristers, two witnesses and either a court clerk or usher from each school would make up a team, and after opening speeches the witnesses would then be introduced to the trial by the examination-in-chief from their own school, and then cross examined (the tough part!) by a barrister from the opposing school whose job it was to make the witness and their statement appear useless. Every witness didn’t have a foolproof statement so it was up to them to stand their own ground against the barristers and to not stray from what they had originally said in their statement – easier said than done! Georgie Ramsay (13Wilson) said “It was really scary going up for the first time but it helped build up my confidence to speak in front of people. I also found it really interesting as it allowed me to apply the law I learnt in class to a real life situation.” Annie Gates (13Otter) added “I loved the challenge of thinking on my feet when being cross examined!”

It was then up to the barristers to produce closing speeches which were used with great effect to sum up the story of the case and persuade the jury to go with the verdict they wanted. The “jury”, which were made from members of other schools would then go and discuss the case and return with their decision. Bishop Luffa did fantastically well in returning many guilty/not guilty verdicts which went the way we were aiming for, but whether we made it any further in the competition was based on a points system. Practising judges were sitting in on each case and gave marks based on the performance of the entire team, and how well each of us did our job. Our team of 14 consisted of four barristers, eight witnesses, an usher and a court clerk who all at least once in the day gained points with their performances. Sasha Arnell-Smith (13 Burrows) the usher for the day said “It was such an insightful day seeing how a trial operates and experiencing the atmosphere of a real court.”

At 2.30, it was revealed that alongside Robert May School, we had made the final of the event, which we were all extremely pleased with. There was nervous tension in the air however, as the realisation dawned that we had a great chance of winning the whole event. The five who performed in the final all gave a great account of themselves, performing to the highest level. The two barristers – Kitty Scott (13Sherbourne) and Sophie Hutchings (13Wilson) – gave powerful opening and closing speeches, which effectively sealed the deal. Sophie said “I really enjoyed the experience of presenting and arguing my case, and receiving the verdict I wanted was very rewarding! It has really helped me develop my advocacy skills and given me a great insight into a career in law.”

It was then revealed by the judge that Bishop Luffa had retained their trophy and were Regional Champions, sparking off some celebration. We as a team are now really looking forward to going off to the National Finals in Cardiff in March, and hopefully winning there too! 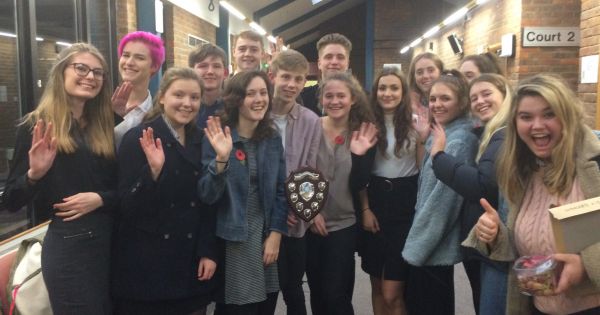