On Tuesday 18th February a group of Year 11, 12 and 13s flew from London to Geneva, Switzerland. This trip was focused on a trip to CERN (European Organisation for Nuclear Research), which features the Large Hadron Collider and is the epicentre for high energy physics research.

On the first day we landed in Geneva and took a train from the airport to our accommodation for the next few days. After dropping off our luggage, we took a tram to the UN square, which featured the UN building and lots of flags from various countries. In the centre of the square, was a large red, wooden chair with a leg missing. The 12 metre high sculpture symbolises opposition of land mines and cluster bombs and its scale was truly immense.

On our second day we first visited the EPFL, also known as The Swiss Plasma Centre. This centre is one of the leading nuclear fusion laboratories in the world and its aim is to be able to develop fusion as an energy source. A scientist gave us a brief introduction of how the machine worked and then gave us a tour around the impressive facility. Since the machine was not on, we were able to get right up close to the metal structure and the thousands of wires that ran in and out of it. This visit allowed us to gain a better understanding of fusion and how greener, safer energy is just on the horizon.

After a short coach ride, we arrived at CERN and spent the rest of the day there. We were able to visit its museum, which was placed in a spherical wooden building and featured interactive elements and helped us to better understand CERN’s history. We then went into the main building and were lucky enough to take part in an interactive lecture, led by one of the scientists who works there. It was extremely interesting to hear the scientific development taking place at this facility and how passionate the people who worked there were about changing the world for the better.  We were then led onto another coach, which took us just over the Swiss border into France, to visit another one of CERN’s facilities. This facility featured The Compact Muon Solenoid (CMS), which is currently investigating dark matter and extra dimensions. The 14,000 tonne detector is placed 100 metres under the ground and generates a magnetic field of 4 Tesla, which is about 100,000 times the magnetic field of the Earth. We took a lift all the way down to the CMS and were able to look at various parts of it since parts of it were being upgraded. 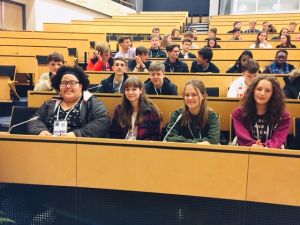 During the evening, we went to a traditional Swiss restaurant called ‘Edelweiss’. We munched on cheese fondue and sausages whilst live music that featured bells, accordions, spoons and even yodelling played. Before returning to our beds, we went for a moonlit walk along Lake Geneva and saw the city all lit up-it was so beautiful.

On the last day, we began with a cruise around Lake Geneva. The weather was kind to us and the views were incredible. You were able to see how the city is nestled in a valley, surrounded by huge, white topped mountains - it was stunning. We then took a tram to Geneva’s natural history museum, which featured an almost overwhelming amount of taxidermy. The museum itself was actually really interesting and contained a plethora of exotic animals and birds.  Later on, we went to the city’s cathedral, which was architecturally breath-taking. We had the privilege to go up all 157 steps to the top of the building and see the panoramic views of Geneva. This city really does have such a beautiful backdrop.  Finally, we returned back to the hostel, collected our luggage, went to the airport and flew home. Personally, I really enjoyed this trip due to its balance of learning and sight-seeing and I can safely say that Geneva is one of my favourite places in the world. I would strongly recommend visiting, if you can afford 6 Francs for a coffee!