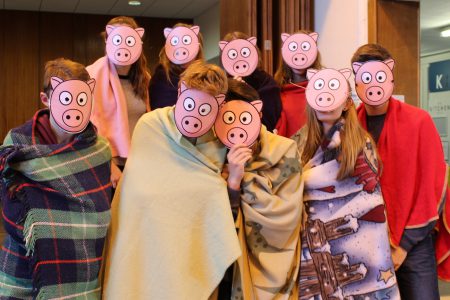 We come to the end of Charity Week today with a wonderful showing of Fancy Dress by pupils, Sixth Form students, teachers and support staff. Many costumes were home-made and the result of a lot of imagination and hard work. To everyone who dressed up – congratulations for your spirit, flair and – in some cases – bravery! The winners were:

Charity Week, which is led and organised by the Sixth Form, raises funds for our three main Sixth Form charities – Hope & Homes for Children, the Snowdrop Trust and Grassroots.

Each lunchtime, Sixth Formers have put on a piece of entertainment in the Bartlett Hall, charging pupils £1.

On Monday some brave teachers agreed to take part in Teacher Karaoke, sharing with the audience the delights of hip hop, ballads to name but a few. Ms Barnett wowed the audience with her rendition of I Dreamed a Dream from Les Miserables. However, the biggest cheers went to Mr Owen and Mr Allman with their rendition of Boom! Shake the Room. Well done to all those brave enough to take part.

Tuesday saw an episode of Would I Lie to You? with teachers and Sixth Formers bluffing about their deepest secrets with the opposing team having to find out which ones were telling the truth. Was Charlie really a future King of Uganda and did Mrs Rogers really set off the fire alarms setting light to a jelly baby?

Who killed the Ofsted Inspector? was the theme during the Murder Mystery on Wednesday. Was it Miss Burton because her magic fish had been taken away by the Inspector? Did Mr Putnam carry out the deed because he was having his Geography trip cancelled? Was the banning of the muppet song too much for Miss Richi? Mr Saunders may have been involved after becoming infuriated that the Inspector was wanting to ban the pool tables (he was also seen in the vicinity of the crime scene at the time it took place). Or was it Mr Taunt having been told by the Inspector that all Sixth Formers should be allowed to wear shorts! After much deliberation and with alibis presented by all the suspects, CCTV revealed that the murderer was in fact Mr Putnam brandishing a very large Geography textbook, who could not cope with the thought of his trip being cancelled and only being allowed to teach Human Geography. Mr Putnam is now safely locked away in Humanities.

Thursday saw Human Kahoot being played out in the Bartlett Hall.

“Audiences have been the best ever,” said Mr Jamie Saunders, Head of Sixth Form. “Great credit must go to Sixth Form Charity Week leaders Sephora Parrish and Xan Hughes. They worked tirelessly to organise the events and ensure every act went well.”

Many thanks to the whole Sixth Form for your energetic support.

As a community we know how to have fun. But we are also a school that looks beyond our own walls and comfortable lives. Our charitable fundraising challenges us to get involved and support people who are not able to enjoy a secure and healthy environment.

The total raised will be announced next week.