We were sad to hear of the deaths of two notable past members of Bishop Luffa School. 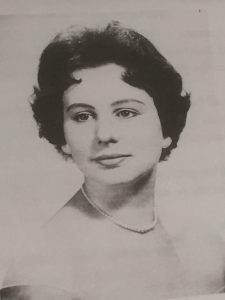 We were very sorry to hear of the death of Hazel Treadgold at Christmas. Hazel was a staunch friend and Governor of Bishop Luffa School, and actively involved in all aspects of governing and school life. She will be missed, too, in many other areas of life in the city and county.

John and Hazel Treadgold came to Chichester in 1989 when John became Dean of the Cathedral, after several years at St George’s Windsor. Hazel was already a distinguished figure, having been Central President of the Mothers Union, a job which took her all over the world in the important work of improving women’s opportunities and fostering family life. She had by then brought up her family, and become a magistrate; soon after they arrived she was invited to become the Bishop Luffa Governor appointed by the Dean and Chapter.

Hazel soon proved an enthusiastic and effective governor. She took a particular interest in the Music Department, but was concerned in many other areas, especially in fund-raising. At the time, Church Schools were required to contribute 10% to all school building projects, and Hazel’s generous contacts and friends, and her own skills, helped to provide for this, as she set up interesting and enjoyable events in which parents, staff and friends could join – many will still recall a memorable ball at Goodwood House, and other happy occasions.

Besides raising funds Hazel was involved with the school building programme, and chaired the Premises Committee for some years, dealing with architects and contractors to complete several new buildings. These included multi-million pound projects such as the 4-classroom extension to the English Block (that also linked the Block to the Sixth Form Centre) and the Creative Arts Centre. These greatly improved our accommodation and provided attractive classrooms and much-needed space for the growing numbers in the school. She was a regular attender at all Governors’ meetings, as well as school occasions, the Carol Service (in her husband’s own Cathedral), school plays and concerts, and the annual Record of Achievement evening. After ceasing to be a Governor, she continued to take an active interest in the school.

We shall all miss Hazel’s cheerful and shrewd presence, and her sensible practical approach. At her memorial service in January Mr Taunt read a prayer for guidance for schools and young people to be ‘equipped with faith and knowledge for the journey of life’. Hazel showed us how well she had learned that lesson. May she rest in peace.

Mr Barry Leighton joined the school staff in 2006. The role of Study Supervisor is to supervise lessons when teachers are away. It is a role that demands a good knowledge of the pupils and an ability to adapt. He joined a new team and so became a pioneer of a new way of covering lessons when teachers were absent, and he, together with Garth Wensley (an RAF man) and Barry Freeman, formed the backbone of a strong and busy team. Barry was unfailingly interested in helping young people, and tackled the job with zest and enthusiasm. He delighted and fascinated pupils with his many stories of Royal Naval life, and pupils often talked of him as ‘a legend’! A number of Bishop Luffa teachers and support staff, past and present, attended the packed memorial service held at St Mary’s Church, Chidham.