French fun for Years 8 and 9 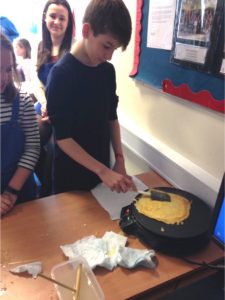 Pupils in Year 8 have been looking at the topic of food and recipes in French lessons and enjoyed the opportunity to make their own pancakes to celebrate Le chandleur and Mardi Gras which took place in February. Pupils had to work in groups to decide what they were going to bring in to put on their pancakes (in French, of course!) and then used traditional crêpiers to make their own crêpes! Délicieux!

Year 9 pupils, who are taking GCSE French next year have made pen-pal links with pupils from Collège Jules Ferry in Montaigu, in the Vendée region in France. We received the first letters in January, written in French, and our pupils chose their pen-pals based on similar likes and dislikes. Pupils wrote a letter back and we welcomed 45 pupils to Bishop Luffa on 27 February. We spent time together looking at the similarities and differences between our schools and then pupils teamed up with their pen-pals for a treasure hunt around Chichester! Several of the pupils have kept in regular contact with their French friends and we hope to build further links with the school in the future.