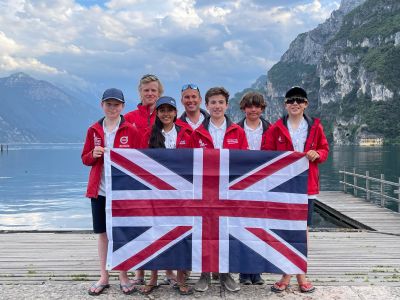 I was really pleased to be selected to represent team GBR at the Optimist World Championship in Lake Garda in Italy. Back in May I took part in the Optimist 2021 GBR Team Selection Event with the top 75 Optimist sailors in Britain. I sailed hard and came second, so I was selected for the top team, which was made up of the top five sailors. 57 different countries selected their best five sailors for the Worlds.

Nine days before we were due to fly, we heard that Italy was imposing a quarantine. We acted quickly and flew out a week early to arrive before it started. This meant that we got there early enough to take part in the Argento Cup regatta and spend lots of time training on the water getting used to the conditions. After the regatta we had a day off and visited a waterfall in a cave. The water had come straight from the mountains and was freezing.

The World Championship started on the 1st July with the opening ceremony. I was really proud to wave the British flag alongside so many other nations.

Then we had measurement. This is where they check dimensions on the boats to make sure no-one is cheating. We had prepared properly so we passed smoothly. 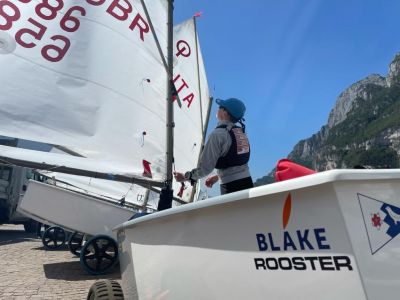 I was really excited for the competition to start. The organisers were great, running as many fair races as possible which were all challenging but enjoyable. We had five days of fleet racing, split into three days of qualifying series and two days of finals. My first day I had one good (11th) and one OK race (38th). I wasn’t quite so happy with 42nd and 19th on the next day. The third day was shortened to one race because of a thunderstorm. After qualifying sailors are split on performance into gold, silver, bronze and emerald fleet. I made silver fleet. The finals racing was just as hard and after six tough races I came 118th out of 259 sailors.

The wind in Garda was lovely for most of the event. It is known for a special thermal breeze called the Ora, but unfortunately this only blew properly on one day. However, we still had around fifteen knots of breeze on all the days except the last two.

I loved all the Italian food that I ate in Garda although by the end of it I was a little sick of pizza and pasta. The weather in Garda was beautiful with 30-degree temperatures every day and sunny skies. However, we once got caught in a huge thunderstorm whilst watching football in town and got completely drenched running back to the hotel.

I completely loved my time at the Worlds and have left the event with many memories I will cherish for the rest of my life. It was amazing to represent my country. I hope I get another chance to return to Garda in the future.