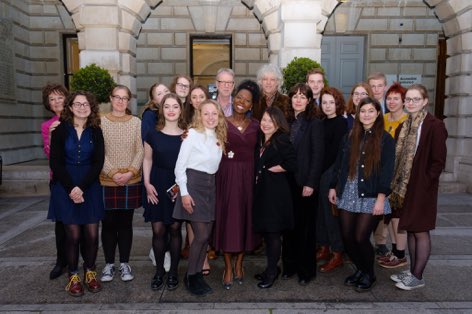 Bishop Luffa Sixth Former Saskia Gardam (13Sherborne) was at the Royal Society of Antiquaries in London yesterday to collect a cheque for £500 for coming second in the 2017 Keats-Shelley Young Romantics Poetry Prize for her poem Tea for Two.

The slanting January rain
Ushered fleeting pedestrians to huddle in yellow cafes
Where a dreamy-eyed waitress accidentally flicked silver onto platter
And the alloyed splinter electrified nearby diners
Who then hushed back into their blurred reveries
The unplanned eyes met in the riptide from counter to screen
Jolting suddenly, and then their face glowed blue again
Twenty strangers pretending to wait company
Reminding themselves to look about as if hearing a familiar voice
Our shared folly twisting in the milky liquid
Which prints calligraphic rings
So much decorum in one room, cubicle alone
Tea for two

This prestigious annual competition this year celebrated the theme To a Friend commemorating the 200th anniversary of the publication of John Keats’ first poetry anthology.

The winners were announced by the Prize Chair, Baroness Floella Benjamin. The evening was introduced by Rt Hon Matt Hancock, MP, Minister for Culture and Digital Culture, and closed with a reading by Sir Bob Geldof of two Keats sonnets, On First Looking into Chapman’s Homer and To One Who Has Long Been in City Pent.

Saskia is currently studying for her A Levels and plans to go to the University of Cambridge in October.