Over £3,800 raised during Charity Week 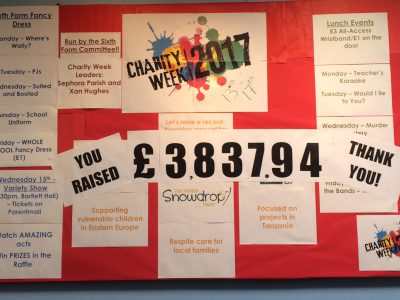 Fantastic news – Charity Week organised by Sixth Formers raised an amazing £3,837.94. This money will be split between the three Sixth Form charities: Grassroots (a Christian charity that provides support for children in Tanzania and other third world countries); Hope and Homes for Children (which is aiming to abolish all institutional orphanages across eastern Europe) and The Sussex Snowdrop Trust (a local charity which provides care for families whose children are suffering from life-threatening illnesses).

Congratulations go to Xan Hughes (13St) and Sephora Parish (13St) who organised the week, with the support of Sixth Formers and staff.