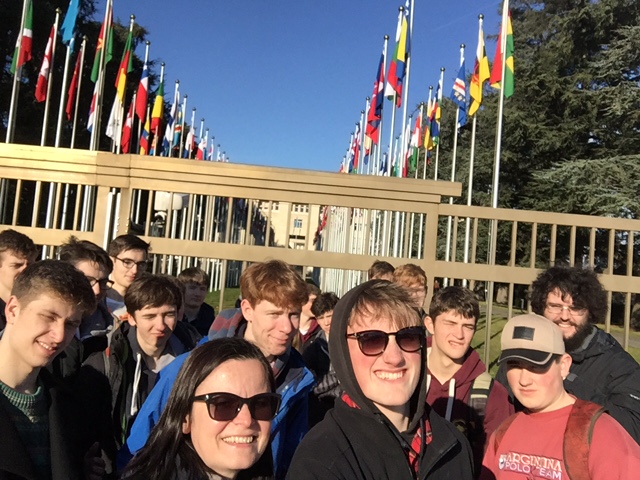 Year 12 and 13 students undertook a physics trip to Switzerland during the half term break. Here two students’ report on their time away:

Violet Phillippo (13Sherborne) put together this report on her time away, “The main highlight of the trip was having the opportunity to explore CERN, which is home to the large Hadron Collider. It was particularly fascinating to be shown around by research scientists who work on projects on site, and they were happy to give us a detailed insight into the workings of the particle accelerator, and how the engineering can be developed to facilitate exciting particle discoveries in the future. 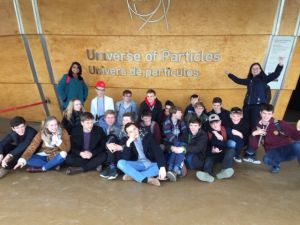 “On a visit to the Swiss Plasma Centre in Lausanne it was inspiring to see scientists working on projects that will directly influence our decisions about how we will source our power in the future, particularly concerning the use of plasma in nuclear fusion reactors. At the end of our stay in Switzerland, we spent our last few hours exploring historic Geneva. A group of us walked the 157 steps up to the tower of St Pierre’s Cathedral and as we gazed out at the spectacular view across Geneva, we reflected on what a brilliant trip it had been.”

Henry Wells (13Wilson) also enjoyed the trip to Switzerland. “It was a very early but thankfully mild start on Monday, as we gathered in Northgate Car Park at 3am. We chatted away in good spirits on the coach to Gatwick. After having some breakfast in the departure lounge, we boarded the punctual plane and tried to catch up on some of our missed sleep on the quick flight to Geneva. To our astonishment, the train from Geneva airport to Cornavin (main) station was an entire 3 minutes late – as it turns out, delays on Swiss public transport do exist! It was only a 15 minute walk from the station to the hostel where we dropped off our bags and collected our packed lunches before getting our first glimpse of the waterfront and the iconic Jet D’Eau, the 140m high fountain in Lake Geneva.

“The weather couldn’t have been better as we explored the pier. Spring was in the air as we boarded a lake cruise boat, on which we toured a small part of the lake and heard geographical and historical information about Geneva and the surrounding area. From certain locations, the majestic Mont Blanc was visible. Afterwards, we moved along the waterfront to visit the History of Science Museum, which mainly focussed on the apparatus used by scientists of the past in various fields, and the tropical greenhouse of the Botanical Gardens. Before finally returning to the hostel, we visited the Broken Chair monument outside the United Nations Office. 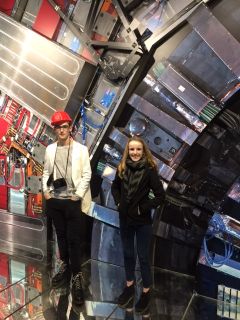 “The second major physics highlight of the trip took place on Wednesday: a visit to the Centre for Research in Plasma Physics in Lausanne. We were impressed by the scale and complexity of the tokamak reactor and associated equipment, and inspired by the plans to increase the efficiency of fusion reactors to the level where they can be used to commercially generate electricity in the future.

“In the afternoon we visited the oldest part of Geneva. Firstly we looked through the Natural History Museum, which mainly showcased all the animals found on Earth, as well as a huge dinosaur fossil display. Then we visited the main cathedral and the surrounding area. Most of us went up the cathedral towers as a group, which turned out to be an unexpected highlight of the trip. One can access two separate tower tops by walking inside the cathedral’s roof structure, and once again the weather was beautiful with excellent visibility over the entire city and mountains beyond.

After a little more exploring of the historic buildings in the vicinity it was sadly time to collect our bags from the hostel and take the train back to the airport (which was a few minutes late, again). We were relieved that a delay to our flight did not increase past 20 minutes, since after three days of an exhausting, non-stop blend of physics and sightseeing we wanted to get home sooner rather than later. It’s safe to say that the final coach trip back to Chichester involved much more sleeping than the first.”