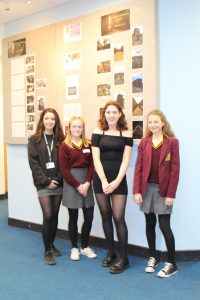 A large display board of images, and a prayer has helped pupils reflect on the events that are the focus of the day. As well as images relating to the Holocaust more generally, there were photos taken by the two girls who recently visited Auschwitz with the Holocaust Educational Trust (Juliet Howes and Kitty Scott – both Year 12). The girls recently shared their experiences in School assemblies – helping to ensure that their visit has a wider impact across the School community. Pupils were able to wear their own shoes to School on Friday– to raise funds for the Holocaust Educational Trust (£1 contribution per child), and to help mark themselves out as individuals. The piles of shoes at Auschwitz show that the Nazis didn’t see the Jews as individuals. A total of £600 was raised.

Each pupil was also given the opportunity to write on a label, something about themselves or a friend that makes them an individual. Again, in comparison to the Nazi treatment of the Jews, where they were all labelled as the same through the wearing of the Star of David.

The purpose of the day was to help make sure that the terrible events of the Holocaust (and genocide more widely) are not forgotten. By celebrating our individuality, and what makes us human – we were drawing a contrast to events in Nazi Germany, where the regime simply lumped people together. It was also about reminding pupils of the dangers of ignoring the horrors of the past, which can then risk them being repeated. Holocaust Memorial Day is also meant to raise awareness of later genocides.