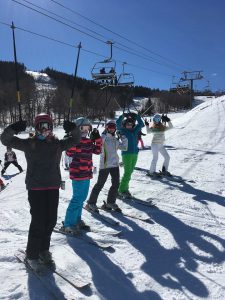 In February half term, 59 students and 6 staff travelled to the USA for the ski trip. We met at Luffa at 11am on Saturday, a surprisingly civilised time for a flight to the USA. We travelled on a coach and minibus to Heathrow, checked our luggage in and had just enough time for lunch before boarding. The flight was 7½ hours, although it didn’t seem that long, as we had plenty of films to keep us entertained. We landed at Boston, where our coaches were loaded, and despite everyone being exhausted, there was definitely a sense of excitement, which only increased as we were told that the coach had Wi-Fi! On arrival at the Snowy Owl Inn, New Hampshire, at 3am British time, we received a very warm welcome, along with some much appreciated snacks. We were allocated rooms and went straight to bed, as we were warned we would have a 5:30am wake up the following morning. 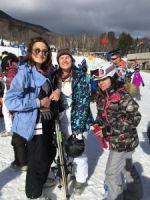 The Waterville Valley shuttle picked us up at 7.00am, so that ski fit could be sorted in time for ski school. We skied for two days in Waterville, then two days in Loon, before having our final day back at Waterville. The weather was extremely kind to us, with bright blue skies every day, and towards the end of the week many of us were skiing without jackets. Thankfully there had been a lot of snow the week before, so the snow conditions were amazing. Great progress was made throughout the week, as for some this was their first experience on skis. We were sorted into ability groups, so there was a mixture of years in our skiing group, which allowed us to make new friends. Our instructors were really helpful, and guided us around the mountains. After ski school, we were very lucky to have the opportunity to free ski with the teachers, which was fun, as we could ski with our friends that weren’t in our ski group. 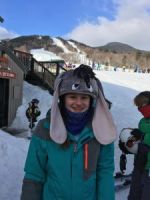 In the evenings, the Donkey of the Day was nominated. Everyone voted for the person who had done the silliest thing, and the person who received the loudest cheer had to wear the donkey hat over their helmet the following day. After the donkey nominations, we had a range of activities planned for us, as well as some free time, which was mostly spent in the swimming pool. We had a few trips to the local village, which was very pretty with all the lights and snow. Ice skating was brilliant fun, everyone got involved and there were some very comical moments. Mrs Harris organised a quiz one night, whilst others went swimming, and we had a trip to the cinema in Lincoln. 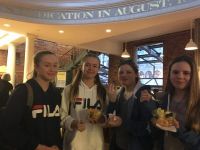 Our final day was spent shopping in Boston, which many of us were very excited about. We visited the mall of New Hampshire, then the Merrimack outlet. Our final stop was Quincy Market, where we brought dinner, and had a chance for a bit more shopping. There was a ridiculous amount of choice, so everyone was satisfied. We repacked our cases with our purchases when we arrived at the airport. Everyone was very tired, but sad to be leaving. 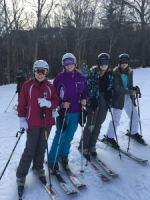 One of the great things about the ski trip is that even once we are all back in school, the friendships we have made continue, even though we have only known each other for a short space of time. We are a ski trip family, and the memories we made will last forever. Josh said, “This trip was a highlight of my life since not only did I learn how to ski, I made so many great friends and they are the nicest anyone could ever wish for. They all took care of me and helped me throughout this trip”.

This trip wouldn’t have been possible without Mr Pyle, Mr Topley, Mrs Topley, Mr Thompson, Mrs Harris and Mr Lillywhite, so we would like to take this opportunity to thank them all for organising such a brilliant trip, and for helping make sure that everyone had so much fun. It wouldn’t have been the same without you all!

Details of the Ski Trip to Italy in February 2018 is now available on Parentmail.