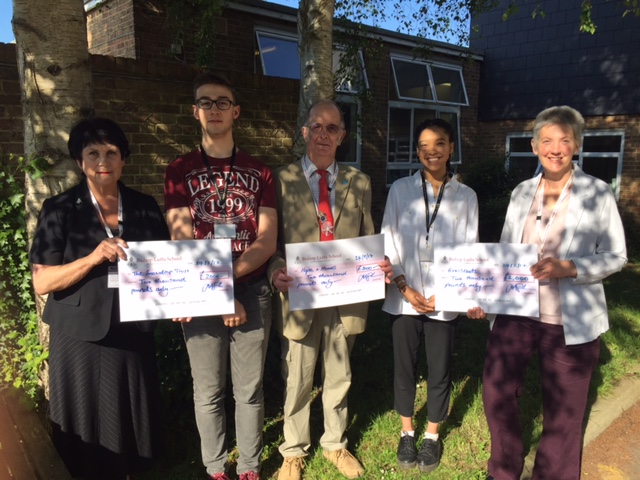 They were extremely pleased to receive £2000 for each of their charities, the money having been raised by this year's Sixth Form Committee through the Fashion Show and whole school Charity Week.

Dr Catherine Sweatman said, "The school has been a wonderful supporter of Grassroots. In the time you have fundraised for us the percentage of teenagers in Tanzania attending secondary school has risen from a meagre 4% to now over 60%. This £2000 will pay for 11 young people go to school and then onto university next year."

Diana Levantine, co-founder of The Sussex Snowdrop Trust, was immensely impressed with the amount raised saying, "Thank you Bishop Luffa for raising funds which will really help local sick children. Our charity really does make an unforgettable difference and many, many families will be so grateful for the help you have given."

Alan Yalden, representing Hope & Homes for Children, also thanked the school and Sixth Form, "Your continued support is making a real difference. Marie Claire spent the first 10 years of her life neglected and ignored, struggling to survive in Rwanda's largest orphanage. Through donations, Hope & Homes for Children found a foster family to care for Marie Claire and their love and support has changed her life. Today she is a happy, confident teenager who is doing well at school and hopes to become a doctor."

Our Sixth Form charity representatives, Xan Hughes (13Story) and Sephora Parish (13Story) were overwhelmed by the three charity presentations. "It's so good to see that the money we have raised will make such a positive impact on young people's lives both locally and internationally," said Sephora. "We're so lucky to live in a great part of the world and have promising futures ahead of us," remarked Xan. "It's been wonderful to have the opportunity to support others in need and give something back."