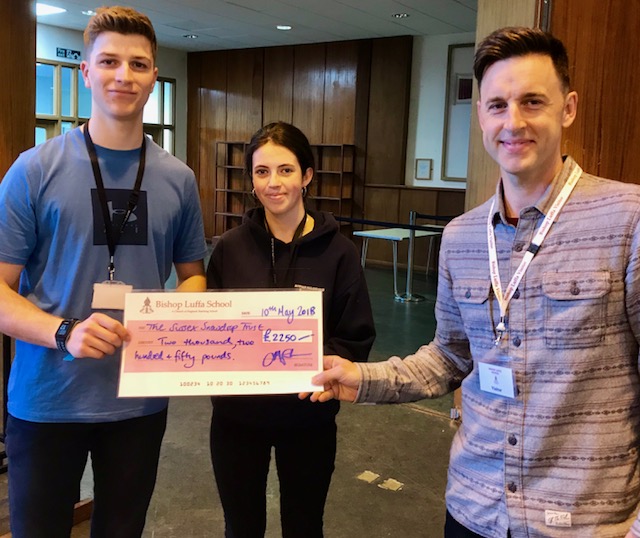 Representatives from our Sixth Form charities, Grassroots and The Sussex Snowdrop Trust have attended Sixth Form assemblies and PSE in recent weeks.

They were extremely pleased to receive £2250 for each of their charities, the money having been raised by this year's Sixth Form Committee through the Fashion Show and whole school Charity Week.

Diana Levantine, co-founder of The Sussex Snowdrop Trust, was immensely impressed with the amount raised saying, "We would like to thank you and everyone who took part in the fundraising events that enabled you to present Dan Armstrong (pictured) with this incredible gift. Dan was particularly delighted to be able to represent Snowdrop as he always feels that as someone who has sadly benefited from the care of our Snowdrop Team, with our nurses and counsellor, he can talk on a personal basis. I am sure that the students appreciated his honesty and bravery." 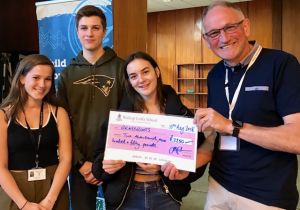 Sharon Anson (whose husband, Hugo, pictured, received the cheque) from Grassroots, also thanked the school and Sixth Form, "We are so grateful. Your kindness will help make life better for so many children. Your gift is helping five young people attend secondary school. Your gift will also go towards providing clean water and nutrition for many children. We realise that not only is this a lot of money but that it also represents a lot of hard work over an extended period, thank you so much."

The fundraising team from Unicef UK also sent a message saying, "Thank you to all the Bishop Luffa students and staff for your wonderful support of Unicef through Fashion Show and Charity Week activities."

Our Sixth Form charity representatives, Naomi Everard (13Ridgeway) and Will Parker (13Otter) were overwhelmed by the charity presentations. Will said, "I am very pleased to have been part of such a successful year of fundraising. It’s been a privilege to be a part of the Sixth Form Committee and work alongside so many great people." Naomi continued, "It’s a great honour to have been able to raise money for such incredible causes. It’s been such fun too, not just on the Committee but working with everyone across the school. Without the involvement of the whole school community it just wouldn’t have been possible." Also pictured with Hugo Anson are Poppy Aspinall and Natalie Inker (both 13 Andrewes) from the Sixth Form Committee who co-ordinated this year’s Fashion Show.