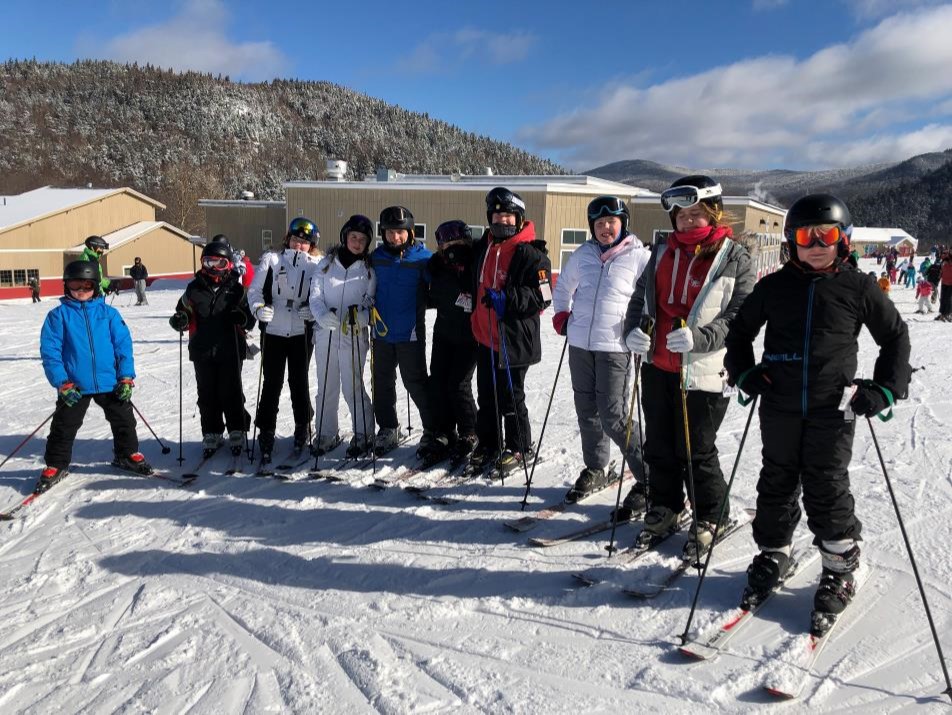 40 pupils and four staff were lucky enough to go on the School ski trip to America. We started early on Saturday morning at 4.00am to get on a coach to Heathrow Airport. Many of us had never been on a long-haul flight so we were amazed when we found out that we would get in-flight meals and our own TV screen! After landing in Boston and passing security and collecting our luggage, we got on a coach to Lincoln. Kancamagus Lodge was our destination. So after a long day of travelling, we had arrived.

The next day, after a hearty ‘American’ breakfast of pancakes, scrambled egg, bacon and sausages, we got on a coach to the ski hire shop on Loon Mountain. After some sizing issues, we were all kitted out for a good day on the slopes. After splitting into four groups, we were off! The snow was decent for a reasonably warm morning, but then came the next obstacle. Lunch. A busy restaurant, along with an apparent lack of queuing, lunch was pretty chaotic. After another afternoon of full-on skiing we were all exhausted, and many relaxed by going in the swimming pool.

The daily award on the trip was ‘Donkey of the Day’, given to those who made themselves look like a donkey, (all in good spirits of course!). It was a close battle between Tatum for ending up unintentionally in the swimming pool and Sam for talking about Brexit with the locals. But in the end, Tatum came out victorious and had to wear a donkey hat for the next day.

The following day was a bit worse in terms of the snow, but there was a lot of improvement in terms of skiing across the groups. For the time being, we said goodbye to Loon and hello to the next challenge – Cannon, the second resort. Cannon was a bit smaller and quieter, but unfortunately, with a wind-chill, -35˚C at the top! We wrapped up really warm and many enjoyed a warm cup of hot chocolate at lunch. In the evening we got a taste of expensive American cinema culture after a short walk into Lincoln.

Overnight we had 8 inches of snow, so Wednesday skiing was bound to be good. And it was! With fresh powder and less ice. It stopped many people slipping up and falling over more, many people moved up ability groups. Unfortunately, Aidan managed to ski into a river, not once, but twice, rightfully earning him a ‘Donkey of the Day’ award. In the evening we went snow tubing, which is basically a luge but on rubber rings, we had a great time, going really fast down a slope on something other than skis. It was a great event in which many new friends (and racing enemies) were made!

After two days at Cannon, we had one more ski day at Loon lined up. For one man, this was the opportunity to go higher and faster than ever before, under supervision from the instructors of course! After returning our hired equipment, we headed back to the lodge on the coach, singing a final serenade of ‘I want it that way’ by The Backstreet Boys. We had a relaxed evening filled with competitive card games and our very own awards evening.

It was an early start the next morning as it was a full on day of travelling, we left the lodge and thanked the staff that treated us so well. Our first destination was Merrimack, where we could stretch our legs and indulge ourselves in true American shopping culture, by splashing out on shoes, clothes and overly calorific foods at the mall. From there, we went into Boston and Quincy Market. Another iconic shopping centre. With lots of food stalls and a really large Urban Outfitters, we could have easily spent hours there, but unfortunately, the fact that we had a plane to catch cut us short. So off to Boston airport!

After seamlessly getting through security, it was a common theme to just wait until we got on the plane. After all, we were all exhausted from the early start, shopping and now we were heading into late evening. Being that late, many got good hours of sleep on the plane home. However, many watched lots of films, played games and reviewed the in-flight meals. Arriving Saturday morning back in the UK, we came back as a much closer troupe. The ski trip experience furthered peoples personal development, as many had either never been skiing, been to America or in many cases both. We arrived back at Bishop Luffa midday on Saturday, and in the blink of an eye, the trip was over. We all really enjoyed the trip to America, and we would all love to go back there sometime again.

“It was very fun, I enjoyed the snow tubing most. At first I felt a bit scared being one of five year 7s, but by the end of the trip I made lots of new friends and felt like I was part of a big ski family!”

Our thanks to all the pupils who went on the trip – we were complimented on our excellent behaviour by cabin crew, ski instructors and hotel staff. You made it a thoroughly enjoyable and rewarding trip for all, so thank you!  Details of the February 2020 trip to Italy will be released soon on ParentMail.- Mr Topley, Mr Thompson, Miss Tugwell and Mrs Gleeson