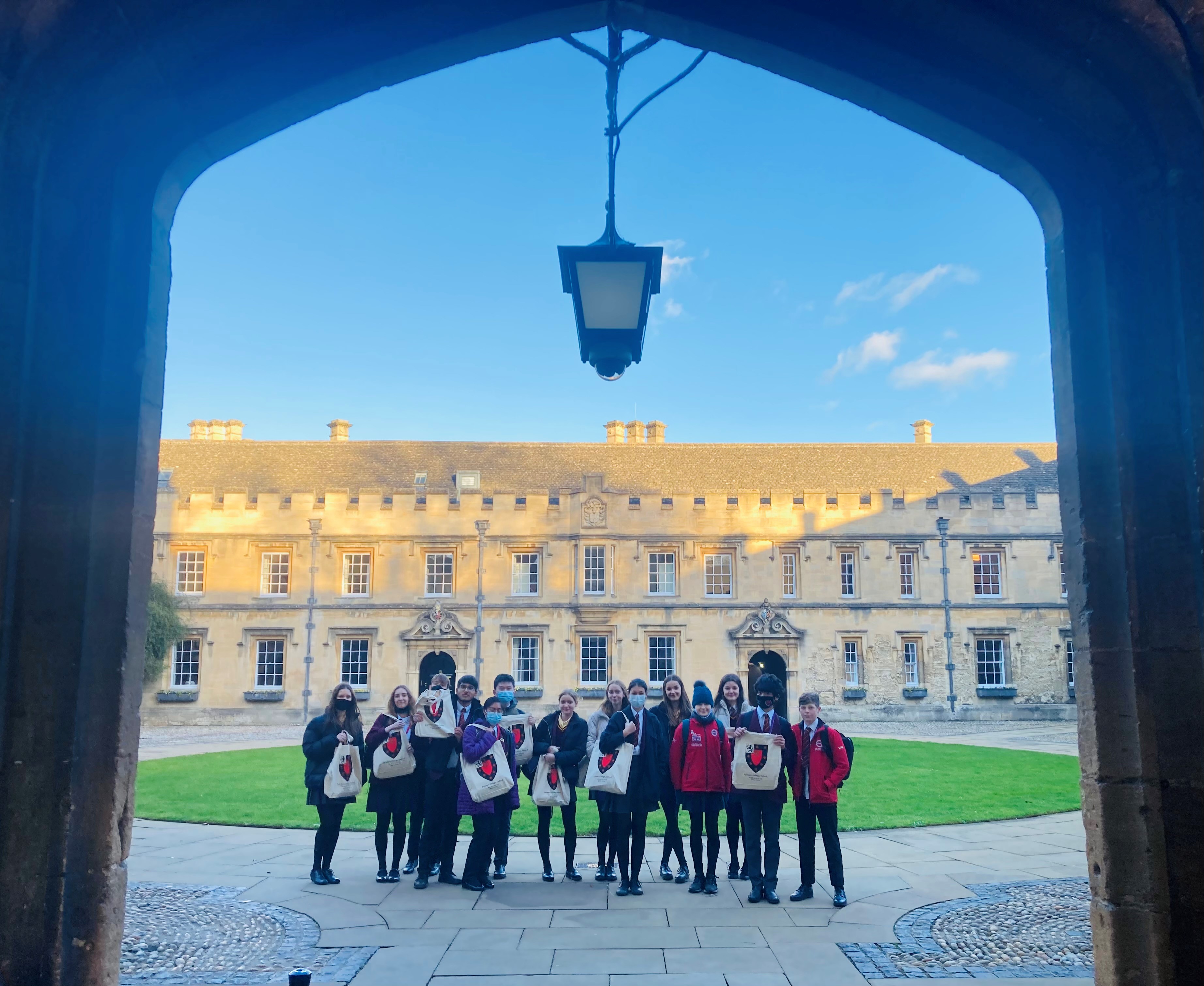 On Friday 5th February, we (along with 13 other students from Year 10 and 11) were lucky enough to go on a day trip to St John's College, one of the 39 colleges making up Oxford University. We went as part of St John's College Inspire Programme which encourages students to stretch themselves and be able to make confident applications to top universities like Oxford. Throughout the day we were shown what life at Oxford could be like and introduced to aspects of its teaching that makes it one of the top universities in the country.

We left Bishop Luffa bright and early at 7:30 and arrived by 10. We were all very excited as none of us knew what to expect. On arrival, we were met with our guide and taken to one of their presentation rooms and greeted with free drinks and biscuits while we were told about our itinerary: a basic overview of the university; lunch in the halls with other students; a tour of the facilities; a visit to one of the libraries; and finally a presentation on the application process and interview stage of applying to Oxford. The day was full on but also extremely interesting at the same time.

As part of the inspire programme we were given a St John’s College tote bag, stationery, water bottles and notebooks! This was all very generous as none of us were expecting them and made us feel very welcome.

After our first presentation we went for lunch in the catered university halls where there were so many choices on what we could eat. The options varied from chickpea stew, to fish and chips or a chicken stew dish. Along with this we were offered a dessert of lemon tart or rice pudding! What we were so shocked by was that this was a usual Friday lunch and not any sort of special occasion showing the high standards of the meals. We found it delicious and it was well received all round. 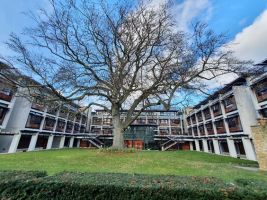 During our tour around St John’s and the beautiful city outside the college, we were absolutely stunned by the breath-taking architecture that surrounded us; even within the college, there were buildings ranging from the 21st to the 17th century, allowing us to travel through all the ages. The entire college is designed to complement the natural environment of St John’s, with extensive gardens encompassing every building. One particularly impressive area was the Kendrew Quadrangle, which provided accommodation for students, and it was built around this mature and beautiful beech tree. It was also fascinating to learn that the college itself offers a plethora of both academic and leisure facilities including gyms, libraries, bars and cafes. I don’t think any of us were expecting just how much you can do within a single college. There was even an allocated chess room! Around all of these facilities and in-between colleges, nearly all of the students there travel by bike and as we walked around the city we saw a great many cyclists going about their daily commutes.

On many of the college’s buildings were also these crests of St John’s and of other colleges too, signifying the times the college has won Cuppers (intercollegiate sporting competitions). This just showed the sense of community and a spirited atmosphere within St John’s, and the student’s dedication to not only their individual studies but to their college also. During our introduction to the university and college, we were told about this collegiate system and how each of the 39 unique colleges differ in size, design, specialities and attitudes. This means that, although during application you can select a preferential choice of college, often it is chosen for you on the basis of your skills and personality. Therefore, everyone ends up at a college that they fit perfectly into, being able to interact with their independent small community as well as the university as a whole. Overall, each college can have anywhere between 30-200 students, and St John’s is one of the bigger colleges in Oxford. 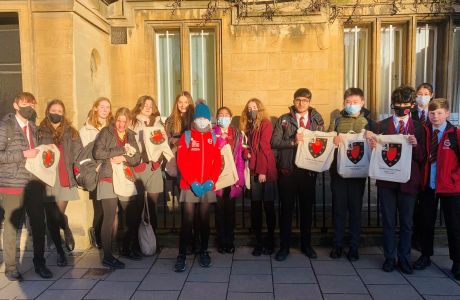 Although many other universities also share this collegiate system, what we learnt that is unique about Oxford (and Cambridge) was the tutorial system. The tutorial system means that whatever course a student is studying, each week there is a session where small groups of two or three students and their tutor talk in-depth about the subject and receive feedback from assignments. This creates a very personalized learning experience from academic experts. In addition to all this, Oxford offers a huge range of extracurricular activities (over 400) and the only thing needed to start a new club or society is 4 people with the same passion. For example, some clubs across the university include Quidditch club, Poker Society and the Hummus Appreciation Society. There clearly is something for everyone!

Finally, before we left we had a presentation on the application process and in particular the interview stage. We were shown the type of questions that get asked and what interviewers want to see. Following the presentation, we were given a task to imitate the sort of situations and questions you are asked during an interview. Each table was given a different question on topics ranging from science to theology to law and asked to discuss it. We then reported back to everyone and our guide questioned us further, helping us to reach the most impactful and thoughtful answer. For example, we were given a question on science which said “How many eagles would it take to pick up an elephant?” To this we immediately started asking questions like “What is the mass of the elephant?”, and even “ What gender would the eagles be?” This exercise was very helpful as it demonstrated what is useful in an interview which I had never really thought about before. Overall, every aspect of the trip was beneficial and we can apply what we learnt for whatever university we might want to attend.