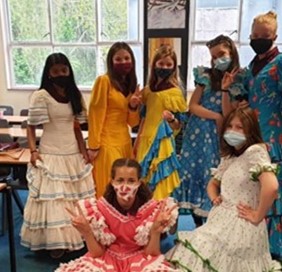 Year 7 classes had the opportunity to use their language skills in a cross curricular way this term as part of the Year 7 Languages Festival. Each class submitted at least one entry, including diverse topics such as as an impressive French Minecraft construction depicting the life of Napoleon, a Latin version of Harry Potter, Hansel and Gretel in German and Dora the Explorer in Spanish.

All of the forms recorded their entry and we had a great deal of fun watching everyone’s films in our lessons.

Each class voted for their favourite (which was, of course, their own!) and we then counted up the votes from everyone in a slightly fairer manner…resulting in the following:

And big congratulations to the following pupils who were awarded Joint winners:

Well done everyone for taking part!