We offer students the opportunity to study A'Level Film Studies in Years 12 and 13. Further details about the A'Level course are available on the Sixth Form website.

Film Studies at Bishop Luffa recognises that film is the world changing art form of the 20th Century and beyond which gives a window to cultures, peoples, places, events and experiences like few other platforms. Life in all its fullness will be experienced in our studies; the exploration of themes of destiny and escape City of God and Pan’s Labyrinth; of British culture, values and ideology in Trainspotting and Shaun of the Dead; of representations of women and millennials in Frances Ha! and of masculinity and fate in No Country for Old Men; of the miraculous and divine intervention in Pulp Fiction and the perils of celebrity and the media in Amy.

Our department fosters a passion and appreciation of film and its contexts. It utilises and stretches students’ fundamental written and practical skills and combines them with a relevant, contemporary curriculum to help students to achieve their very best in a subject they have always loved.

This is a visual representation of how students' knowledge and skills develop through the Film Studies curriculum.

(click on the image below to view a larger version) 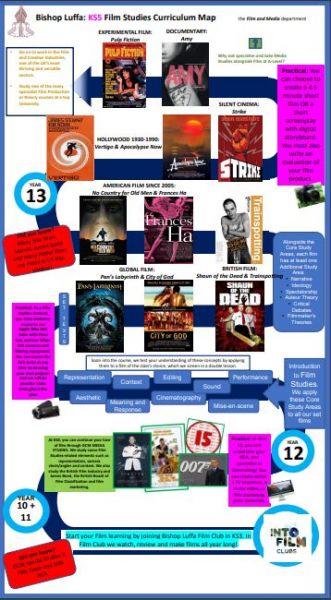 Students of Film Studies are the students of the future, gaining the skills needed to develop successful careers and great academic minds.

Film Studies will not only change the way you watch film, but more importantly it will challenge you to think in new ways and question or change your perspective on a whole host of issues, for example, representation of race or gender. Studying film allows you to understand important issues and developments within history, society and culture, using film as the medium with which to gain a greater insight into these areas. As well as gaining an appreciation of film as an art form in terms of its visual storytelling, studying film can enhance your understanding of the world in terms of competing values, attitudes and beliefs. Our course also incorporates a creative production element where you will be able to put what you have learnt into practice by making a short film or writing a screenplay. At Bishop Luffa you can choose to edit with our comprehensive and up-to-date industry standard software: Final Cut Pro on our Macs or Adobe Premiere (and the complete Adobe Suite) on our PCs.

The development of deeper critical and creative thinking gained by studying film can enhance many different career paths and is a much sought after transferable skill in both employment and further study.

Employment in the screen industries has grown by over 20% since 2009 and will substantially outpace the economy wide increase of 3% if the skills shortages in this area are fulfilled. Career paths for students of Film may include practical avenues such as Film-Making, Directing, Producing and Editing but a qualification in Film Studies also allows you to move into more theoretical pathways such as Film Criticism, Journalism, Teaching and Education.

You will study the key elements of film form including cinematography, mise en scene, editing, sound and performance. You will also study the contexts of your chosen films and what was happening when the films were made. What can the film tell us about history and society at that time? You will study the films in terms of the representations they present or challenge.

Creative Production - There is a creative production element which allows you to showcase the film-making or screenwriting skills you have developed during the course.